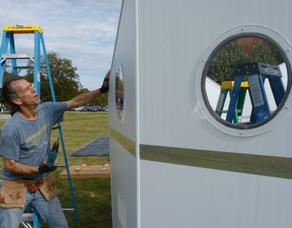 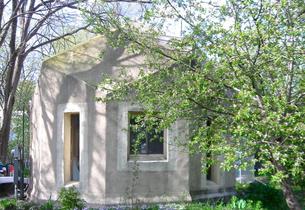 Comprised of ten wall panels and ten roof panels, the DecaDome® has the structural advantages of geodesics but is less complex.  Vertical walls and identical, interchangeable parts make manufacture easier and assembly intuitive. Years of field-testing with numerous panel and connector combinations have proven that DecaDomes® are a better way to build buildings.  Their high strength, light weight, and phenomenal wind and weather resistance makes them ideal for emergency and temporary shelter, greenhouses and storage units.

Meanwhile, Structural Insulated Panels or SIPs were in the early stages, pioneered by people such as Bill Porter in Holland, Michigan.  SIPS integrated frame, skin, and interior treatment in a single panel.  Years of experiments proved that a hybrid structure had the most potential to meet all of the goals set by the NewHouse design team: a rhombic-triacontahedron made of panels continuously connected along their edges with a patented edge-connector.  The DecaDome® was born.

The Rhombic Triacontahedral structures first popularized by Steve Baer (who called them Zomes) were a variation of the dome made of ten vertical walls, and ten roof panels.  But Zomes still used a framework of 2x4 lumber, and were constructed in a conventional way.

They asked why buildings needed to be built out of thousands of parts. They looked at a variety of alternative building systems: The Geodesic Domes of R. Buckminster Fuller were extremely strong and efficient, but their curved walls were uncomfortable for many people, and they still required hundreds  of hubs and struts.

In 1975, the founders of NewHouse Research and Design began their search for a better way to build buildings.  A group of experienced craftsmen, business people and psychologists, they sought to create a building system that made the most efficient use of materials while also creating spaces that were comfortable and welcoming to be in.

THE NEW SHAPE OF SHELTER™

Learn about the Decadome advantages. 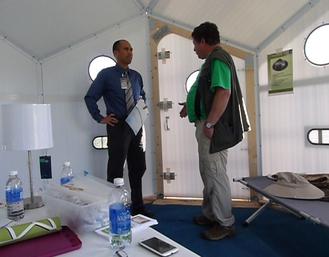